The Safest Way to Secure Your Ladder

Lock your ladder into position
before stepping foot on it

The Lacket accessory that allows you to tackle every situation

The Lacket is the innovative ladder safety product that stops an extension ladder from slipping sideways or falling backwards vertically.

The Lacket’s patented, award-winning design uses a unique wedging effect to lock an extension ladder firmly into position, and through extensive testing has proven to withstand even the most extreme conditions.

The Lacket is the only adjustable ladder safety product that enables you to secure an extension ladder before even setting foot on the ladder.

Before you step on a ladder, Lock it Safe with Lacket.

The Lacket is based on a simple patented design that uses a wedging force to secure a ladder from sliding horizontally or falling backwards vertically.

The Lacket firmly secures an extension ladder without the user first needing to step foot on the ladder. The ladder is completely secured before the user ascends. The Lacket complements fibreglass ladders to ensure safe working around electricity.

The Lacket has undergone rigorous testing, and has proven to remain secure even when the ladder has been subject to the most extreme sideways and backwards forces.

The Lacket is a ladder attachment that is fully adjustable to fit any of the most commonly used ladder makes and models that meet Australian safety standards. It secures a ladder using any overhang, without removing roof tiles or drilling into the building fascia.

The Lacket can remain attached to your ladder, whether or not it is being used, so you don’t need to repeatedly install and uninstall. The Lacket folds conveniently away within the ladder rungs when the ladder is being stored or transported.

Approved By Those In The Know

SafeWork NSW (formerly WorkCover NSW) agrees that The Lacket is an acceptable means of securing a ladder. If you’re correctly using The Lacket to secure your ladder on a NSW worksite, you’ve satisfied SafeWork NSW.

The Lacket Stabiliser Bar has been designed to add versatility to the Lacket. The unique wedging effect of the Lacket relies on an overhang to firmly secure your ladder into a rock-solid position. But what if an overhang isn’t available? 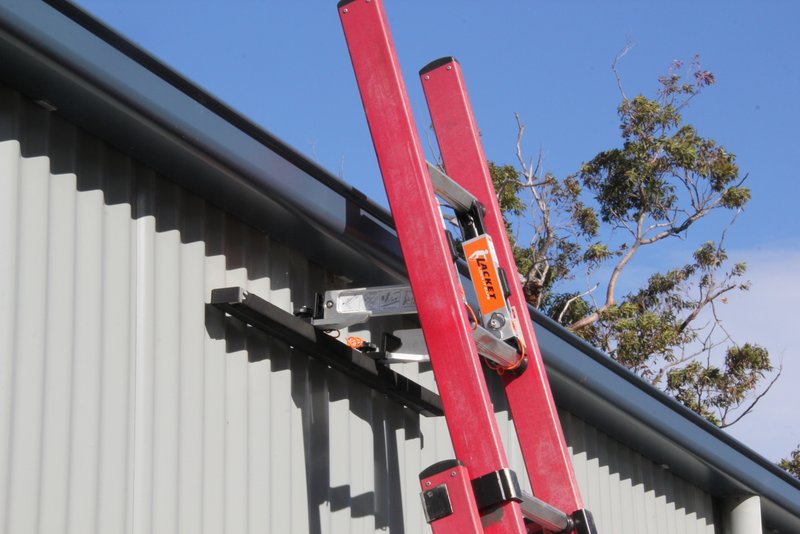 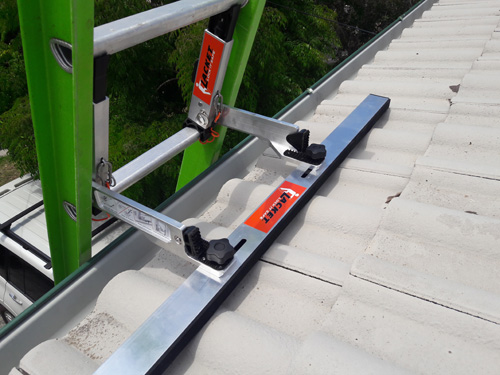 The A-Stand Attachment is our latest innovation, designed in conjunction with Australian energy suppliers to allow an extension ladder to be converted into an A-frame ladder.

To find out more, please contact us for a demo. 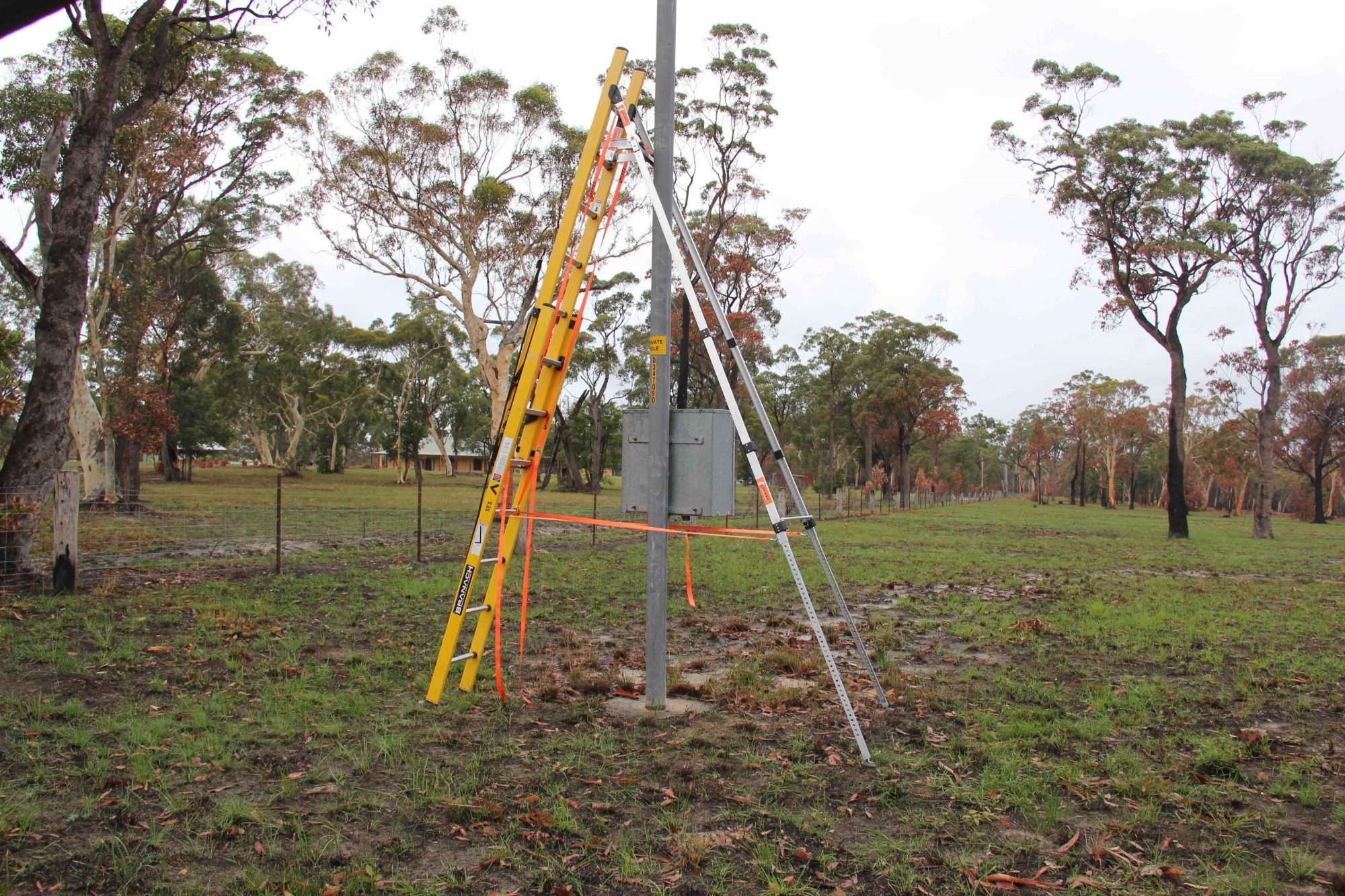 Need to see it to believe it? To get your hands on the Lacket and understand the rock-solid feel of a properly secured ladder, visit one of our trusted distributors.

If you’re a NSW business, you may be eligible for a rebate for the purchase of a Lacket under the SafeWork NSW Rebate program!

How does The Lacket work?

The Lacket uses a wedging effect to secure an extension ladder to any building or structure that has an overhang. Have you ever tried to jam a door closed by wedging a chair underneath the door handle? That gives you a rough idea of how the wedging effect is used to lock the ladder into position. When combined with the provided safety straps to tie off the base of the ladder, the ladder is wedged or jammed into position and cannot be moved.

What materials is The Lacket made of?

The Lacket is made from a combination of Stainless Steel, T-6061 alloy and high density impact resistant plastic. Plastics are also UV rated to withstand constant UV rays without compromising the structural integrity of The Lacket. It’s built to last wherever you store and use your ladder.

These materials have been specifically chosen for their strength, weight and ability to resist rust and corrosion.

Has The Lacket been tested?

The Lacket has undergone rigorous testing by independent engineers to prove that it can withstand the most extreme forces – forces that would never normally be exerted on a ladder. We always recommend that the strictest ladder safety be adhered to, even with The Lacket in place to secure your ladder.

Is The Lacket approved by Australian safety governing bodies?

If you use The Lacket in conjunction with the provided cam-buckle tie down straps, you will fulfill the requirements for securing the top and bottom of an extension ladder as required by Australian safety governing bodies.

Will The Lacket fit on my ladder?

The Lacket is fully adjustable, and will fit on any of the most commonly used ladder makes and models that meet Australian safety standards.

Do I have to secure the bottom of my ladder when using The Lacket?

SafeWork NSW recommends that you secure the top or the bottom of the ladder (or both).

We at The Lacket Company recommend that you never work alone on a ladder. However we understand that this is not always possible, so here are some alternate solutions for securing the base of the ladder whilst using the Lacket to secure the top.  And remember, good ladder safety means you should always use a ladder on a level, immovable surface.

How Does The Lacket Work?

Watch this short instructional video for all you need to know to use The Lacket on your extension ladder.

The Lacket user manual is available for download as a PDF.

How Do I Install the Lacket Stabiliser Bar?

This short instructional video demonstrates how to install the Stabiliser Bar to your Lacket.

The A-Stand Attachment user manual is available for download as a PDF.

SafeWork NSW currently offers a $500 rebate on the purchase of eligible safety equipment, and as a winner in the SafeWork NSW 2017 Awards, the Lacket is an eligible product under the rebate.

There are a few simple steps to be followed in order to receive the rebate, and we’ve outlined them for you below to make the process as easy as possible.

1. Is your business eligible? If you answer Yes to all the following criteria, you are eligible for the small business rebate!

3. Purchase the Lacket Bundle after you have watched the online webinar (within 6 months of completion).

4. Once you have received the Lacket and are using it in your workplace, complete the SafeWork NSW Small Business Rebate online application form.

5. Submit your application, either online, by email or post. You will need to attach copies of your tax invoice and receipt to the application.

We’re an Australian owned and run company that wants every ladder user to have a safe experience when working at heights.

The Lacket Company was formed in 2015, when two mates (a Paramedic and an Engineer) discovered that there were no simple, practical ways to secure an extension ladder in order to prevent the ladder from slipping or falling.

As they witnessed an increase in the number of hospitalisations due to falls from ladders, the developers wanted to look at the problem from another perspective. After researching products currently available in the market, they quickly realised that all the options were impractical, dangerous and didn’t actually secure the ladder to a stable structure. The biggest problem they found was the need to secure the ladder prior to climbing it, as many of the currently available options require the operator to climb an unsecured ladder in order to secure it.

After almost three years of research, design, development and testing, what evolved was the most innovative ladder safety attachment that met the shortcomings of anything else on the market. Because this safety attachment caused the ladder to be as stable as though it was bolted to the building with a bracket, it was named The Lacket.

We hope that you get to experience the confidence that The Lacket will give you as you climb your extension ladder.

The Lacket Company is proudly based in the Illawarra, and intends to remain a local business for many years to come.

In October 2017, The Lacket Company was proud to receive the SafeWork NSW Award for Best Solution To An Identified Workplace Health And Safety Issue for small business! 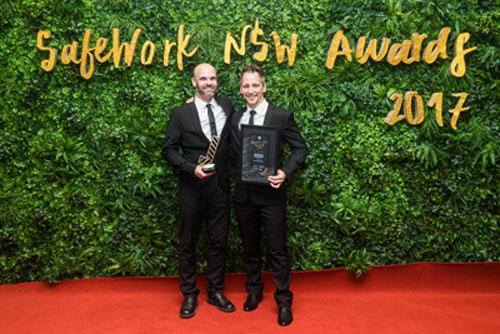 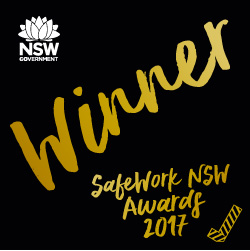 The Lacket Company are thrilled to be awarded the winner in the 2019 National Safety Awards for the Best Solution of a WHS Risk (Small Business category)! 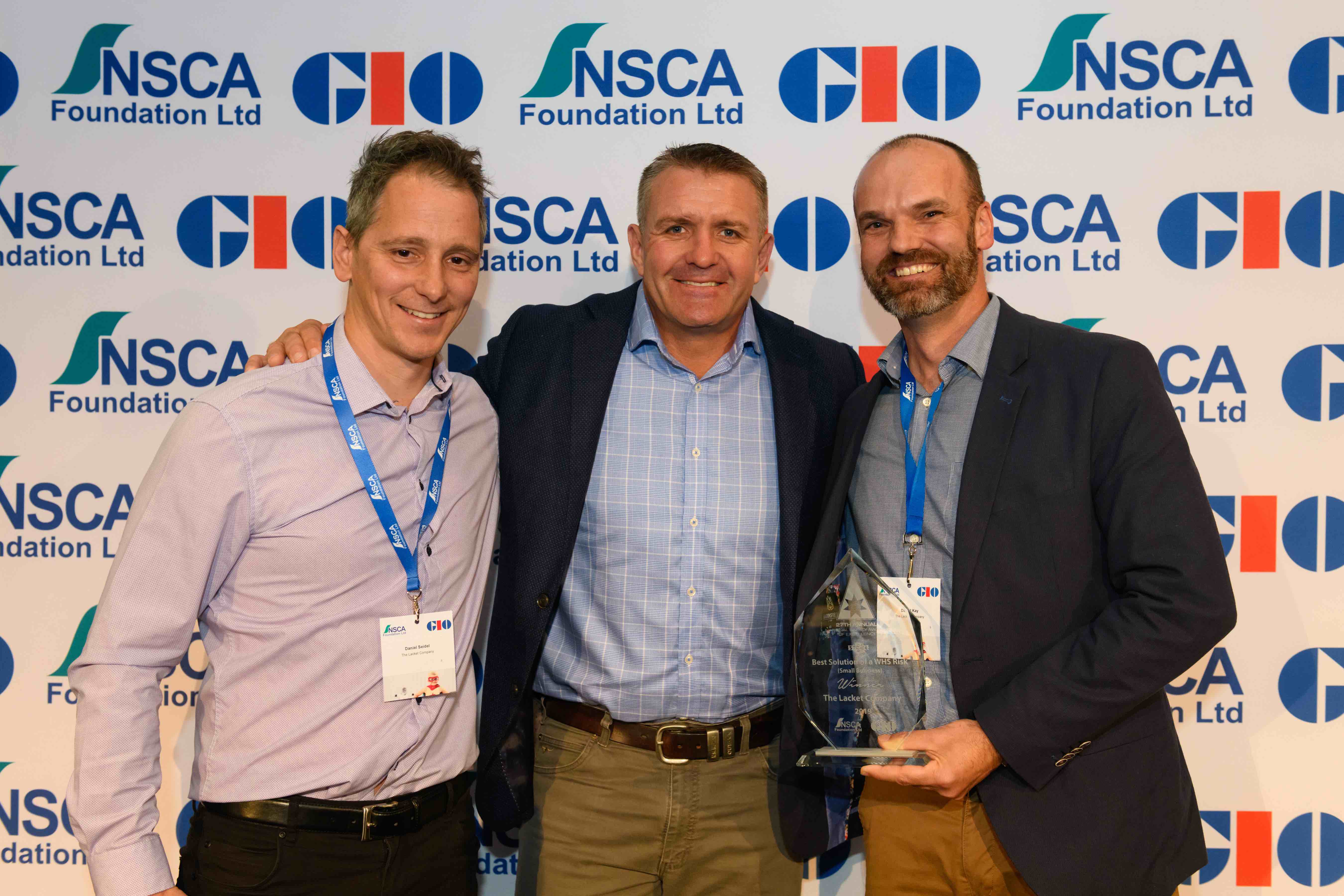 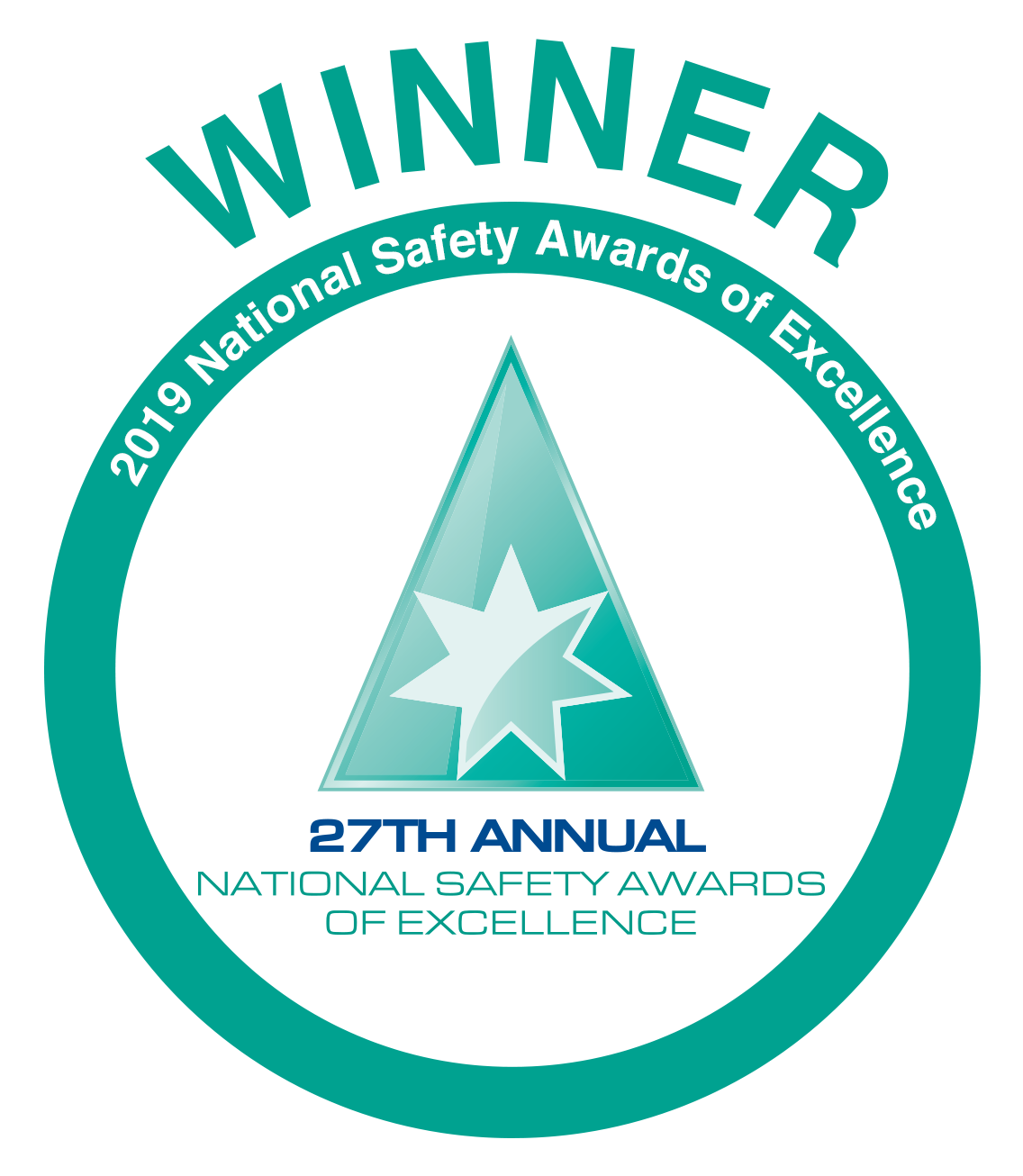 Send Us A Message

© 2020 The Lacket - Lock Your Ladder Safe. All Rights Reserved, The Lacket Company.